Tasha Thanks Emergency Services 10 Weeks after her RTC

On the morning of Saturday 10th April 2021, 20-year-old pharmacy student Tasha Marshall from Coleraine was driving to her part-time job in Belfast when she suddenly hit a patch of black ice on the road, causing her to lose all control of her car and hit a tree.

The unseasonably frosty weather that morning resulted in temperatures dropping as low as -3 degrees in some parts of Northern Ireland, not what one would expect in the month of April. Tasha was travelling in her Ford Fiesta car, which had just successfully passed its most recent MOT test, on the outskirts of Ballymoney after 8.00am when it left the road. “I don’t have any recollection of the morning of my crash at all. I am still putting pieces of it together based on what other people have told me such as members of the NIFRS (Northern Ireland Fire and Rescue Service), NIAS (Northern Ireland Ambulance Service) and eyewitnesses. I was travelling to work in Boots chemist, Belfast by myself. I don’t even know who it was who phoned 999.”

Due to the serious extent of Tasha’s road traffic collision, three crews from NIFRS, members of NIAS and the Air Ambulance carrying the HEMS (Helicopter Emergency Medical Service) team were tasked to the incident. “I have no memory of it at all, but I do know it took quite a long time for the NIFRS to cut me out of my car before the ambulance service and Air Ambulance NI team could treat me.”

During this time, officers from the PSNI (Police Service of Northern Ireland) arrived at Tasha’s home where her mother Marie answered the door to them. Tasha’s mum Marie said, “As soon as I opened the door I just began shaking, I knew something bad had happened.”

Tasha had sustained several serious injuries including a broken collar bone, broken ribs, injuries to her right arm which required 17 stitches but worst of all a diffuse axonal brain injury. Due to this traumatic brain injury, the HEMS team provided critical care interventions at the roadside to minimise further damage to her brain. She was then flown directly to Royal Victoria Hospital, Belfast where she put into intensive care. “I remained in a coma for four days after the accident, it was a very worrying time for my family as the doctors expected me to come around much quicker. But I woke up again on the 13th April which was my mum’s birthday!”

Tasha spent 11 days in RVH, Belfast before she was sent home to recover from her injuries. “I am currently studying Pharmacy at university, and I was just about to complete my 2nd year exams when the accident happened. I hope that I will be able to complete those exams this summer and continue with my studies with my year group in the next academic year, but nothing has been confirmed yet with the university.”

Since her accident, Tasha has been continuing to receive rehabilitation for her brain injury. “I have some short-term memory problems since my accident, and I have been having issues with my hand-eye coordination too so I cannot drive for another few months, but I am determined to keep working at this and make a full recovery.”

Visiting the Air Ambulance NI base only 10 weeks after her accident, Tasha and her family paid thanks to the work of the Air Ambulance NI Charity service, all the emergency services who treated her and the staff in RVH, Belfast. “Everyone that day all worked together as one team and gave me the best care, I can’t thank them enough.” One of the NIAS paramedics even took all my university books that were in my car and delivered them to my home later that night! Everyone has been so good to me.”

Damien McAnespie, Area Fundraising Manager for Air Ambulance NI Charity, said, “It was lovely to have Tasha and members of her family visit our base just 10 weeks after such a serious accident. It was inspiring to hear how all the emergency services worked together with a such a successful outcome for Tasha.

The charity Air Ambulance Northern Ireland, in partnership with the Northern Ireland Ambulance Service, provides the Helicopter Emergency Medical Service for Northern Ireland. The HEMS team are tasked to on average two calls a day somewhere in Northern Ireland; we never know where they go or who they treat but it is lovely when the family reaches out and contacts our charity. I wish Tasha all the best in her recovery and in her pharmacy studies in the years ahead.” 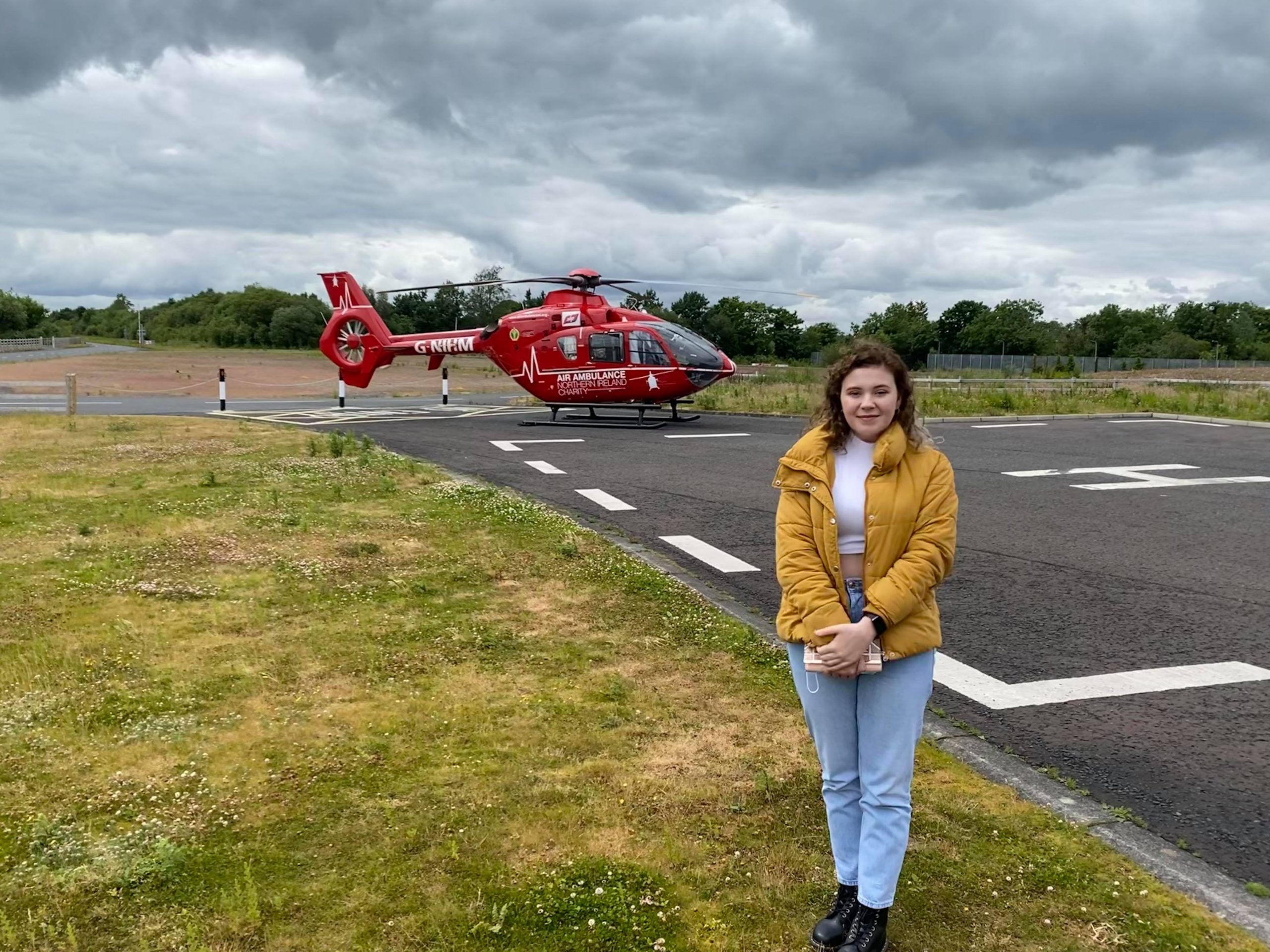