The last year has brought many unforeseen complications to organisations, charities, and families across Northern Ireland. The Team here at Air Ambulance Northern Ireland had to make significant changes to overcome the many hurdles thrown at them by the health pandemic. Despite the challenges faced by our local charity, the life-saving service which is funded largely by public donations, continues to grow year on year.

Over the past 12 months, the Helicopter Emergency Medical Service (HEMS) crew have been busier than ever. Although many of us were safely tucked up at home, we reported an increase in the number of taskings, with a staggering 692 missions in total throughout 2020. This is an increase of 18.5% compared to the previous year. Since the inception of the service in July 2017, the crew have been tasked over 1,943 times in total.

With many people adjusting to working from home, being furloughed from work, and decreasing their usual travel arrangements, our roads have been less busy than usual. However, road traffic collisions remain to be the most common type of incident attended by the medical crew. The second most prominent incident type was falls, accounting for 24% of their taskings. Closely followed by workplace accidents, including those that occurred on farms, which made up 11%.

Our patients are at the centre of our service. Serious or life-threatening situations can happen to anyone at any time and on average at least 1 – 2 individuals in Northern Ireland find themselves in desperate need of the critical pre-hospital care provided by the HEMS Team, every single day. In 2020 72% of patients were male and 28% were female. The medical crew carry specialised medical equipment to treat any person, no matter their age and last year 14% of patients were paediatrics.

In January 2020 we announced that we would begin carrying blood on board our EC135 helicopter and rapid response vehicle. This major clinical development enables the Doctor and Paramedic team to administer blood to patients who need it before they reach the hospital. Many of the HEMS patients have life-threatening haemorrhages that must be rapidly controlled. The early administration of blood at the scene of an incident makes a significant difference to those who have suffered major blood loss. The crew carries O negative blood which can be given to anyone. In 2020 blood was administered 24 times, which is an average of twice per month. 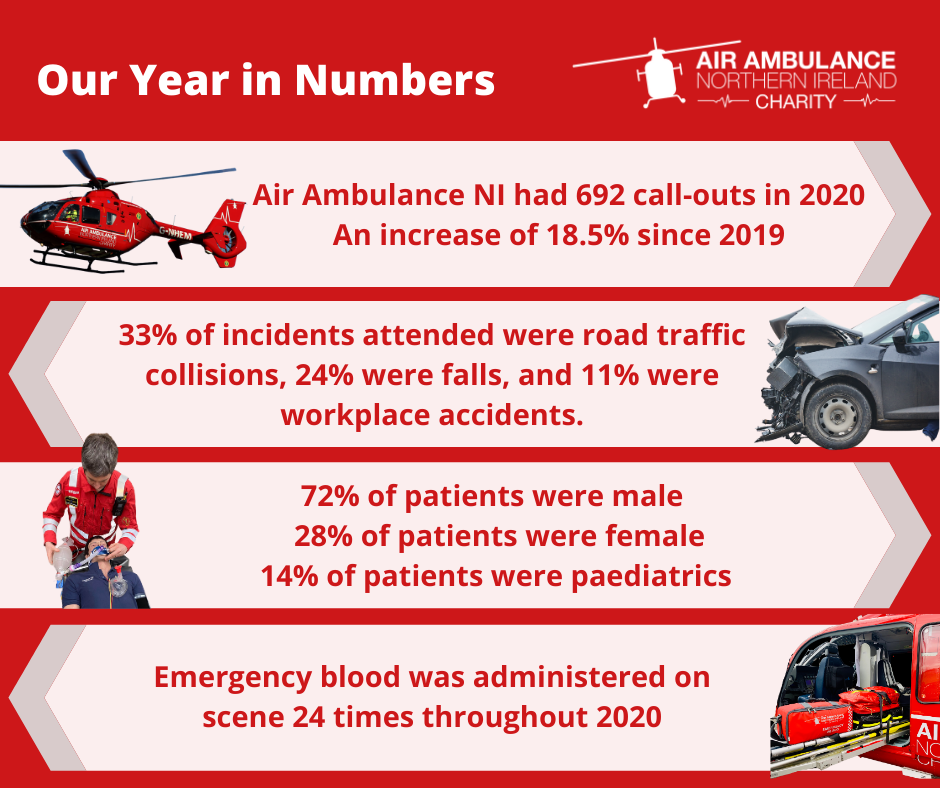 Despite the increase in taskings our local charity based just outside of Lisburn is currently experiencing a dramatic downturn in fundraising caused by the health pandemic. However, to keep sustaining the life-saving service, we are currently offering many opportunities for the public to participate in virtual fundraising activities. One of these opportunities includes our partnership with Boost Drinks to host The Big Prize Competition. There are 12 amazing prizes up for grabs and competition entry only costs £1. We also offers exclusive membership programmes for their adult and junior supporters called Club AANI. These memberships start from as little as £8 per month for adults and £5 per month for under 18’s. Club AAN members receive unique benefits including an exclusive gold pin badge and an invitation to their annual thank you event.